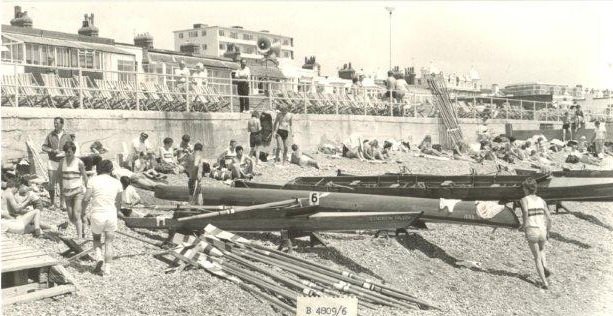 Bexhill Rowing Club was first formed in June 1893 as a result of a meeting held at the Bexhill Chronicle office, and its instigator was Mr T.F. Garrett, a Hastings man who had recently come to reside in Bexhill and saw the possibilities for a rowing club.

It was very fortunate in obtaining the interest of Viscount and Viscountess Cantelupe and in fact the club colours of red, green and white, which are in use to this day, were chosen at a meeting over which Lady Cantelupe presided at the Manor House in July 1893.

Mr Garrett was also the inspiration of Bexhill’s first regatta, held in September 1893 for which provided a gala day for the town. The programme included races for sailing boats as well as for oarsmen and there was also a 500-yard amateur handicap swimming race. 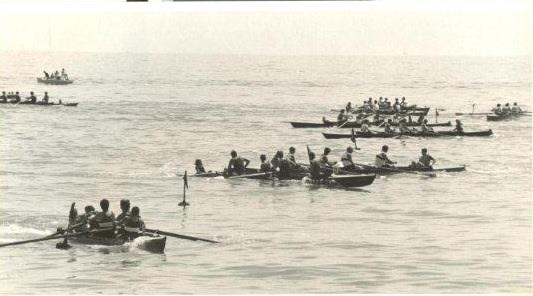 In the rowing events there was a race for coastguard four-oared galleys, which Bexhill won handsomely against the competition of the Hastings, Pevensey, St Leonards, Eastbourne and Kewhurst crews. Thereafter the Rowing and Marine Club, as it became known, being a very lively one, and ‘among the best on the coast between Herne Bay and Portsmouth,’ enjoyed a successful existence until 1906.

The marine section was a social club and occupied the first floor of the boathouse which stood just west of where the Colonnade was later built. Its amenities included a billiards room. The ground floor, in addition to the boathouse, included a simple gymnasium where the members exercised with punch-ball and bars when the weather was rough, or in the evenings.

The first captain of the club was Mr G.A. Shurey, who donated a four-oared galley. It was for Mr Shurey who was prominent in the public life of the town for some years, that the Metropole Hotel was built between 1897 and 1900. Under the presidency of Viscount Cantelupe and later when he became Earl De La Warr, the club received influential support in the town and among its stalwarts was Mr F. Stevens, father of Mr A.J. Stevens, who became captain of the town’s fire brigade. Early one Sunday morning in June 1900, the boathouse was destroyed by fire, but the boats, including a four-oared galley given by the president and named ‘Countess De La Warr’, were rescued undamaged, and the club was able to continue its activities. 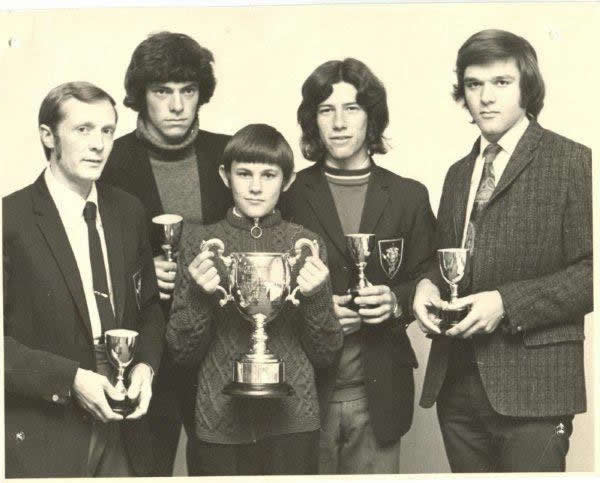 In 1903 prizes and cups to the value of more than £200 were won. The club’s demise three years later, when the boats were sold by auction, was largely caused by the decision of the London, Brighton and South Coast Railway Company, which had carried the 30-foot boats free to various regattas, to charge high freightage which the club could not pay. It was this that led to the general practice of hiring charabancs to transport the boats and their crews, and it will be remembered that only in 1967 did coast rowing clubs face another crisis over the transportation of craft by this means.

In the days of the conveyance of boats by train, the rowing club members had to wheel their craft on a trolley to the railway station, load it on to a goods wagon, and then unload it at the other end.

One of the greatest stalwarts of the early days was Mr E.R. (‘Dosher’) Domm, a champion oarsman in his youth and a popular official at many regattas in later life. Another veteran who cannot be excluded for at any mention of local rowing is Mr A. Stanley Young of Cooden Mount who, on at least one occasion, was a member of a Bexhill crew which rowed to Hastings, competed in races there and afterwards rowed back to Bexhill. 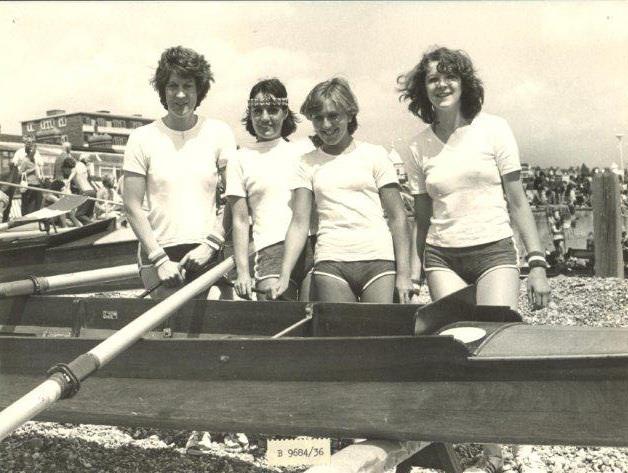 The town remained without a rowing club for 20 years and its re-formation in the spring of 1925 was accomplished at a meeting at the Devonshire Hotel, over which Councillor R.C. Sewell, who was then mayor of the borough, presided, and Mr E. Spencer Carr, who had done much preliminary work, reported that there were 12 prospective rowing members.

The new club, of which Earl De La Warr, son of the president of the former club, accepted the presidency, was initially assisted by the generosity of the Hastings and Folkestone clubs, which loaned boats, the Hastings offer also being accompanied by the first of a set of oars. As a result of the Rowing Club revival, Bexhill was able to hold a regatta in August 1928 for the first time for 20 years, although it had to be postponed from the first arranged date owing to bad weather.

The regatta was managed by a committee of which Admiral C.E. Anson was chairman and Mr Harry Riley, son of Mr Robert Riley of Hastings, who had earlier been active in the Rowing Club revival, the secretary. Of the latter, the Bexhill-on-Sea Observer commented that, ‘although far from being one of the veterans, he has an intimate acquaintance of how things are done in other towns, and he was able to invoke the co-operation of his father, who understands the business of running a regatta from beginning to end.’

With the revival of the Rowing Club after the second world war, the first regatta for nine years was held in August 1948, when eight other clubs competed. Since then the annual regatta has been one of the most popular events in the town’s summer calendar, although its organisation is carried out by only a few enthusiasts and the assurance of municipal help towards meeting any financial losses has been an important factor in the continuance of these pleasant occasions.

The club’s most successful year was in 1966 when, for the first time, the championship of the coast came to Bexhill, an occasion marked by a mayoral reception for the club and a memorable celebration dinner. Some notable achievements in recent years: in the fifties Tony and Harry Frostick leading the way in the Senior Pairs. Harry had the distinction of being the first member to win the Coastal Senior Sculls in 1958, the Open Championship at Deal, the ‘News of the World’ Open at the Serpentine and at Putney regatta he convincingly won at his first attempt on river craft. Chris Pierce followed on with an outstanding record as Senior Sculls Champion from 1961-66. He left Bexhill to join the Tideway Scullers and from there became a member of the National Squad rowing in regattas on the Continent and in Canada. He reached the height of his career when he was selected to represent Britain in the 1972 Munich Olympics.Graham Dawes started rowing in 1969, being a member of the Novice Fours CARA Champions in 1971 and Junior Fours three years later (also representing the UK in 1993 Dragon Boat racing in Hong Kong). In 2009 Bexhill Rowing Club’s members Nic and Phil McCorry and Matt Hellier accompanied by Ian won the very first Indian Ocean Row the crew were given a civic reception and the keys to the Town.

Mark Mitchell became possibly the clubs best ever rower by winning the 2010 Championship 10 consecutive years in a row!!